ISAIAH 30:10-15
10 Which say to the seers, See not; and to the prophets, Prophesy not unto us right things, speak unto us smooth things, prophesy deceits:
11 Get you out of the way, turn aside out of the path, cause the Holy One of Israel to cease from before us.
12 Wherefore thus saith the Holy One of Israel, Because ye despise this word, and trust in oppression and perverseness, and stay thereon:
13 Therefore this iniquity shall be to you as a breach ready to fall, swelling out in a high wall, whose breaking cometh suddenly at an instant.
14 And he shall break it as the breaking of the potters’ vessel that is broken in pieces; he shall not spare: so that there shall not be found in the bursting of it a sherd to take fire from the hearth, or to take water withal out of the pit.
15 For thus saith the Lord GOD, the Holy One of Israel; In returning and rest shall ye be saved; in quietness and in confidence shall be your strength: and ye would not.
16 But ye said, No; for we will flee upon horses; therefore shall ye flee: and, We will ride upon the swift; therefore shall they that pursue you be swift.

REVELATION 11:1-2
1 And there was given me a(MEASURING) reed like unto a rod: and the angel stood, saying, Rise, and measure the temple of God, and the altar, and them that worship therein.
2 But the court which is without the temple leave out,(TO THE WORLD NATIONS) and measure it not; for it is given unto the Gentiles: and the holy city shall they tread under foot forty and two months.(JERUSALEM DIVIDED BUT THE 3RD TEMPLE ALLOWED TO BE REBUILT)

DANIEL 9:27
27 And he( THE ROMAN,EU PRESIDENT) shall confirm the covenant with many for one week:(1X7=7 YEARS) and in the midst of the week he shall cause the sacrifice and the oblation to cease,(3 1/2 yrs in TEMPLE SACRIFICES STOPPED) and for the overspreading of abominations he shall make it desolate, even until the consummation, and that determined shall be poured upon the desolate.

ISAIAH 60:9-10
9 Surely the isles shall wait for me, and the ships of Tarshish first, to bring thy sons from far, their silver and their gold with them, unto the name of the LORD thy God, and to the Holy One of Israel, because he hath glorified thee.
10 And the sons of strangers shall build up thy walls, and their kings shall minister unto thee: for in my wrath I smote thee, but in my favour have I had mercy on thee.

ISAIAH 2:1-5
1 The word that Isaiah the son of Amoz saw concerning Judah and Jerusalem.
2 And it shall come to pass in the last days, that the mountain of the LORD's house shall be established in the top of the mountains, and shall be exalted above the hills; and all nations shall flow unto it.
3 And many people shall go and say, Come ye, and let us go up to the mountain of the LORD, to the house of the God of Jacob; and he will teach us of his ways, and we will walk in his paths: for out of Zion shall go forth the law, and the word of the LORD from Jerusalem.
4 And he shall judge among the nations, and shall rebuke many people: and they shall beat their swords into plowshares, and their spears into pruninghooks: nation shall not lift up sword against nation, neither shall they learn war any more.
5 O house of Jacob, come ye, and let us walk in the light of the LORD.

MARK 11:9-10,15-17
9 And they that went before, and they that followed, cried, saying, Hosanna; Blessed is he that cometh in the name of the Lord:
10 Blessed be the kingdom of our father David, that cometh in the name of the Lord: Hosanna in the highest.
15 And they come to Jerusalem: and Jesus went into the temple, and began to cast out them that sold and bought in the temple, and overthrew the tables of the moneychangers, and the seats of them that sold doves;
16 And would not suffer that any man should carry any vessel through the temple.
17 And he taught, saying unto them, Is it not written, My house shall be called of all nations the house of prayer? but ye have made it a den of thieves.

ISAIAH 51:3-4
3  For the LORD shall comfort Zion:(JERUSALEM) he will comfort all her waste places;(FROM NUCLEAR WAR) and he will make her wilderness like Eden,(I BELIEVE THE EZEKIEL 40-48,(4TH) TEMPLE WILL BE BUILT 25 MILES FROM THE CURRENT TEMPLE MOUNT AFTER JESUS RULE FOR THE 1,000 YRS FROM JERUSALEM) and her desert like the garden of the LORD; joy and gladness shall be found therein, thanksgiving, and the voice of melody.(PRAISE TO JESUS IN THE DESERT-COULD BE THE NEW JERUSALEM-4TH TEMPLE BUILT 25 MILES INTO THE DESERT FROM THE CURRENT TEMPLE MOUNT.SINCE EZEKIELS TEMPLE IS WAY TO BIG FOR THE CURRENT TEMPLE MOUNT)
4  Hearken unto me, my people;(ISRAEL) and give ear unto me, O my nation:(ISRAEL) for a law shall proceed from me,(JESUS IN JERUSALEM) and I will make my judgment to rest for a light of the people.(ISRAEL AND THE WORLD)

HERES WERE I BELIEVE THE 3RD TEMPLE WILL BE REBUILD WERE THE DOME OF THE SPIRITS SITS. 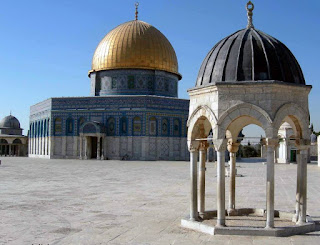 Click on photo to enlarge it
The small dome in the forefront is known as the Dome of the Spirits or Dome of the Tablets. It has received a lot of attention because of Asher Kaufman's theory that it marks the place of the Second Temple's Holy of Holies.

The dome stands to the northwest of the Dome of the Rock and is in a direct east/west line from the peak of the Mt. of Olives through the Eastern Gate to the Temple Mount.

According to the Mishnah, the High Priest stood on the Mt. of Olives, and while looking towards the Holy of Holies, he would sacrifice the Red Heifer and sprinkle the blood in its direction.
THIS 2009 STORY SHOULD BE LISTENED TO WORLD.BY THE TEMPLE MOUNT FAITHFUL.

Temple Mount Faithful to Israeli Government:
Build the Temple Now; No Need to Wait for the Messiah


"And it shall come to pass in the last days, that the mountain of the L‑rd's house shall be established on the top of the mountains, and shall be exalted above the hills; and all nations shall flow to it. And many people shall go and say, 'Come, and let us go up to the mountain of the L‑rd, to the house of the G‑d of Jacob; and he will teach us of his ways, and we will walk in his paths; for from Zion shall go forth Torah, and the word of the L‑rd from Jerusalem. And he shall judge among the nations, and shall decide for many people; and they shall beat their swords into plowshares, and their spears into pruning hooks; nation shall not lift up sword against nation, nor shall they learn war any more. O house of Jacob, come, and let us walk in the light of the L‑rd.'" (Isaiah 2:2-5)

We must clarify another important point. According to Glick, the Temple will be built '... when the Messiah shows up ... it could well be tomorrow, but it might be another 100 years, or even 400 years.' However, none any of the Scriptures show that the Temple should be built only when the Mashiach comes. In the Torah G‑d commands His people Israel: "Build me a temple and I will dwell among you" (Exodus 25:8) with no condition that it should be built after the coming of Mashiach Ben David. The first Temple was built without any condition to wait for the coming of the Mashiach. The second Temple was built after the destruction of the first Temple and the regathering of the Jews back to their land by G‑d with no waiting for the coming of the Mashiach. In a similar time to our era when the people of Israel did not want to rebuild the Temple and perhaps were waiting for the coming of the Messiah, the prophet Haggai called the people of Israel to listen and obey the Word of G‑d to immediately rebuild the Temple:

Even the Jerusalemite Talmud indicates that when the Mashiach comes, the Temple already has been rebuilt and he will go up to the roof of the Temple, calling to the people of Israel: "Awake! The time of your redemption has come!"
According to the prophets of Israel, three events should take place before the coming of Messiah Ben David:
The first two events have already come to pass in Israel during this exciting time of redemption. Now the third Temple should be immediately built, says the G‑d of Israel, with no delay and then the Messiah will come.The Temple Mount and Land of Israel Faithful Movement is faithful to the Word of G‑d and His expectations from the people of Israel. We shall not rest until Israel removes the enemy from the Holy Temple Mount as the G‑d of Israel expects her to do and the Temple is rebuilt in our lifetime. The third Temple should be built immediately by Israel to be a House of Prayer for the people of G‑d, Israel, and for all the nations. Everyone, both in Israel and in the entire world, is called to stand with the Faithful Movement of G‑d and to help her to build the Temple of G‑d on Mount Moriah in Jerusalem and to prepare the people of Israel to again be a biblical nation fulfilling the mission in which the G‑d of Israel anointed her to be: "a holy nation, a kingdom of priests and a light to the nations" Exodus 19:5,6).
In G‑d we trust!!
Diaspora - The Kotel Song 1979-(JERUSALEM YOUR KING AWAITS YOU)(KING JESUS HIS THRONE FROM JERUSALEM FOREVER)
http://www.youtube.com/watch?v=jJx5H9kCFXA

On Your Walls O Jerusalem
http://www.youtube.com/watch?v=pY3yisnyjz4&feature=related

DOME OF THE SPIRITS ON THE TEMPLE MOUNT WERE I BELIEVE THE 3RD TEMPLE WILL BE REBUILT RIGHT BY THE BOME OF THE MUSLIMS.
https://www.google.ca/search?q=dome+of+the+spirits+on+the+temple+mount+pictures&hl=en&client=firefox-a&hs=Y0T&rls=org.mozilla:en-US:official&channel=fflb&prmd=imvns&tbm=isch&tbo=u&source=univ&sa=X&ei=Gx_nT6uRHcTa0QHkyvXRCQ&ved=0CFgQsAQ&biw=1138&bih=693

Ark of the Covenant
http://www.youtube.com/watch?v=qW_6CwB35rA&feature=related

3rd Temple Under Construction! (A MINI 3RD TEMPLE SO THE PREISTS CAN PRACTISE 3RD TEMPLE SACRIFICING WHEN THE 3RD TEMPLE IS REBUILT)
http://www.youtube.com/watch?v=KPrvJTGePYs&feature=related

The Third Temple, Part 4 of 11. Animal Sacrifice(WILL BE DONE IN IT)
http://www.youtube.com/watch?v=YquGoNs2qKg