MARK 5:1-20
1 And they came over unto the other side of the sea, into the country of the Gadarenes.
2  And when he (JESUS) was come out of the ship, immediately there met him out of the tombs a man with an unclean spirit,(AT LEAST 2,000 DEMONS IN HIM)(PLUS SATAN POSSESSED HIM)
3  Who had his dwelling among the tombs; and no man could bind him, no, not with chains:
4  Because that he had been often bound with fetters and chains, and the chains had been plucked asunder by him,(BROKEN) and the fetters broken in pieces: neither could any man tame him.(DEMONS HAVE SUPER HUMAN STRENGTH 10 TIMES OURS)
5  And always, night and day, he was in the mountains, and in the tombs, crying, and cutting himself with stones.(THESE WERE ALSO SUICIDAL DEMONS IN HIM)
6  But when he saw Jesus afar off, he ran and worshipped him,
7  And cried with a loud voice, and said, What have I to do with thee, Jesus, thou Son of the most high God? I adjure thee by God, that thou torment me not.(DEMONS CAN SPEAK,HEAR,SEE,THINK,MEMORY,FEEL PAIN,SUFFERING.)(ALL SENSES AS US)
8  For he said unto him, Come out of the man, thou unclean spirit.
9  And he (JESUS) asked him, What is thy name? And he answered, saying, My name is Legion: for we are many.(A ROMAN LEGION CONSISTED OF 5,000 SOLDIERS)
10  And he besought him much that he would not send them away out of the country.(THESE WERE OVIOUSLY TERITORIAL DEMONS FOR THAT SPOT,AND THEY DID NOT WANT TO LEAVE THE SPOT AND TOMB (CEMETARY) AREA AND MOUNTAIN AREA COUNTRY OF GADARENES)
11  Now there was there nigh unto the mountains a great herd of swine feeding.
12  And all the devils besought him, saying, Send us into the swine, that we may enter into them.(DEMONS POSSESS ANIMALS SO DEMONS POSSESS HUMANS TO)
13  And forthwith Jesus gave them leave.(JESUS CAST THE LEGION 2,000 DEMONS FROM THE MAN INTO THE PIGS) And the unclean spirits went out, and entered into the swine: and the herd ran violently down a steep place into the sea, (they were about two thousand;) and were choked in the sea.(SUICIDAL DEMONS)
14  And they that fed the swine fled, and told it in the city, and in the country. And they went out to see what it was that was done.
15  And they come to Jesus, and see him that was possessed with the devil, and had the legion, sitting, and clothed, and in his right mind: and they were afraid.(THE DEMONIAC WAS NORMAL IN HIS RIGHT MIND,NO YELLING,SCREAMING,VIOLENT ACTS)
16  And they that saw it told them how it befell to him that was possessed with the devil, and also concerning the swine.
17  And they began to pray him to depart out of their coasts.
18  And when he was come into the ship, he that had been possessed with the devil prayed him that he might be with him.
19  Howbeit Jesus suffered him not, but saith unto him, Go home to thy friends, and tell them how great things the Lord hath done for thee, and hath had compassion on thee.(ONLY JESUS CAN CAST DEMONS OUT THREW HIS PASTORS AND WHO JESUS CHOOSES TO USE)(THE PERSON IS ONLY THE VIHICHLE,JESUS CASTS THE DEMONS OUT OF THE PEOPLE,ANIMALS OR ITEMS)
20  And he departed, and began to publish in Decapolis how great things Jesus had done for him: and all men did marvel.

THIS ZOMBIE ATTACK CRAZE IS RIGHT FROM THE DEMONS OF HELL.IN FACT THESE 2,000 PLUS DEMONS THAT WERE IN THE DEMONIAC BACK THEN ARE PROBABLY THE VERY SAME DEMONS THAT ARE POSSESSING PEOPLE TODAY.REMEMBER DEMONS HAVE NEVER DYING BODIES,THEY LIVE ON FOREVER AND EVER JUST LIKE WE AT THE RAPTURE GET OUR NEVER DYING BODIES.THESE DEMONS WANTED TO BE AROUND CEMETARIES.THE ZOMBIE CRAZE CONSISTES OF THE DEAD COMING TO LIFE AND EATING THE FLESH OF HUMANS.THIS IS NO ACCIDENT AS JESUS SAID THE RAGE OF THE LAST DAYS WOULD BE DEMONIC WORSHIP.REMEMBER 1/3RD OF THE ANGELS OF HEAVEN WERE BOOTED OUT WITH SATAN AT THE FALL,SO WHO KNOWS HOW MANY MILLIONS OR BILLIONS OF DEMONS GOT BOOTED TO THE HEAVENLIES.AND OF COURSE THE DEMONS CAN WALK AND POSSIBLY FLY TO EARTH AT WILL TO TRY TO POSSESS PEOPLE.AND SINCE THESE DEMONS ARE TERRITORIAL,THEY LOVE STAYING AT WERE THEY RESIDE.THESE 2,000 CEMETARY DEMONS THAT WERE IN THE DEMONIAC,THEN IN THE SWINE.HAVE PROBABLY TODAY SETTLED IN THE FLORIDA AREA WERE DEMON WORSHIP IS RAMPANT SO THEY DECIDED TO GO THEIR AS THEIR TERRITORY OF CEMETARY AND FLESH EATING LUST.I FIND MOST OF THE CASES IN FLORIDA,BUT AS THE DEMONS DECIEVE AND POSSESS THE PEOPLE IT WILL GO WORLDWIDE OVIOUSLY.THE DEMONIAC WOULD HAVE BEEN NAKED JUST LIKE THESE ZOMBIE FLESH EATERS ARE IN MOST CASES.IN THE VERY NEAR FUTURE(ANY TIME NOW) THE 4 DEMONIC WAR ANGELS WILL BE LOOSED AT THE EUPHRATES RIVER IN IRAQ/SYRIA/OR TURKEY THAT WILL KILL OFF 3 BILLION PEOPLE IN WW3.SO THIS ZOMBIE CRAZE IS JUST THE BEGGINING OF THE DEMONIC ACTIVITY TO KILL OFF ALL OF GODS CREATIONS THE HUMAN BEINGS,SINCE DEMONS HATE US SO MUCH BECAUSE WERE MADE IN THE IMAGE OF THE TRINITY.GOD THE FATHER,JESUS THE SON AND THE HOLY SPIRIT THE THIRD PERSON OF THE TRINITY,ONE GOD,3 OFFICES.AND DEMONS HATE GOD SO MUCH THAT IN HELL FOR WHOEVER GOES THERE,THE PEOPLE FROM EARTH,GET TORTURED,MUTILATED,AND EVERY OTHER IMAGINABLE RAPE AGAINST THE HUMANS-THE DEMONS CAN DO.AND THIS TORMENT AND TORTURE GOES ON FOREVER,NEVER ENDING.THAT MEANS TRILLIONS UPON TRILLIONS UPON FOREVER THAT THIS HAPPENS TO THE PEOPLE THAT GO TO HELL AS WELL AS BEING THROWN BY THE DEMONS IN THE LAKE OF FIRE.THE MORE THE PUNISHMENT AGAINST HUMANS THE SWEETER THE REVENGE THE DEMONS THINK IN THEIR MINDS BECAUSE OF THE HATE FOR GOD AND HUMANS.YOU JUST CAN NOT BELIEVE HOW HELL WILL BE LIKE.NO ONE SHOULD GO THERE AND DOES NOT HAVE TO IF YOU ACCEPT JESUS INTO YOUR HEART.AND WITH OUR NEVER DYING BODIES WE CAN LIVE FOREVER WITH JESUS.JUST AS IN HELL ALL THE PEOPLE HAVE NEVER DYING BODIES,SO THEIR TORMENTS GO ON FOREVER,NEVER ENDING.NOTICE THESE DEMONS STICK AROUND THEIR COUNTRY FROM THE DEMONIAC,WELL I THINK THESE 2,000 DEMONS HAVE SETTLED FOR SURE IN FLORIDA AS THEIR HEADQUARTERS.

The Zombies flesh eaters are fore taste of what is going to be happening in Hell. Flesh eating Demons will be feasting on those people who have followed satan to his everlasting abode.
They will eat their flesh & then the flesh will grow back again so that those Demons will have a everlasting food supplied consisting of﻿ all the Zombies who chose to follow satan instead of Christ. Who follow the darkness instead of The Light. Who chose Hell in place of Heaven.

Spate of so-called 'zombie' incidents has the country abuzz with talks of a coming apocalypse. Just stay clear of Florida 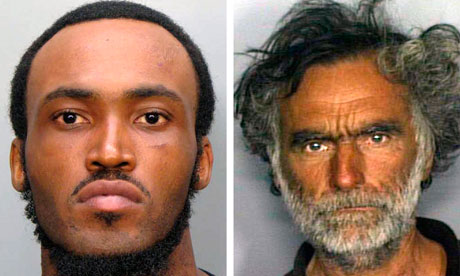 A fatal case of flesh-chewing in Miami: Rudy Eugene, left, and his victim, Ronald Poppo. Photograph: Handout/Reuters
America is famous for its gun violence, but lately the nation's crime headlines have been dominated by tales of felons using their fangs.Homo homini lupus est, the saying goes: man is a wolf to man. But that's supposed to be a metaphor.The fact that attacks with teeth are less frequently fatal than assaults with a deadly weapon might be some consolation – but the nation's media are now obsessing over this spate of so-called "zombie" attacks.The latest incident occurred in Florida on Wednesday night, when police used Tasers to subdue a naked man accused of taking a bite out of another man's arm.The suspect, Charles Baker, 26, didn't have long to chew on his prey before cops came running. A Manatee County sheriff's office report said the victim, Jeffery Blake, 48, lost no flesh beyond a chunk from his left biceps.When police arrived Baker faced them, screamed and made as if to attack, the report said.One officer shot the suspect with a Taser, but he pulled the probes out. Police were able to subdue Baker after another officer shot him, once again with a Taser.
A similar case in late May in Miami ended fatally when a naked assailant, Rudy Eugene, defied police orders to stop chewing at the face of his victim, Ronald Poppo. Police shot Eugene dead. Poppo lost 50% of his face and is still in the hospital.Florida hardly has a monopoly on criminal cannibalism in America these days. Maryland university student Alexander Kinyua was indicted last week on charges of murdering a 37-year-old man and eating his heart and part of his brain. Kinyua had a history of disturbing internet writings and had been accused in a separate assault at his school, Morgan State University, earlier in the month.
In Montreal, suspect Luka Magnotta is accused in the stabbing and dismemberment death last month of Chinese student Jun Lin. Magnotta allegedly made a video of the attack showing himself eating Lin's flesh.
In a significantly less gruesome incident earlier this month in Naples, Florida, Giovani Martinez was arrested on suspicion of drunken driving and transported to a hospital, where he bit a nurse on the arm. Then he threatened to "eat the staff's faces like the guy in Miami", according to a police report.
The suspect in the most recent attack, Charles Baker, was enraged when Jeffery Blake, 48, answered the door at Baker's girlfriend's home, police said. In what police described as an intoxicated fit, Baker tore off his clothes, threw furniture and attacked Blake with his teeth, tearing flesh from his biceps.Baker was taken to the hospital and treated before being taken to jail. The victim's condition was unknown.Baker went to the home to visit his children living there, police said. Blake also lived at the residence.